the irrationality of attraction

the irrationality of attraction
was it his eyes
his smile?
his need or
my need?

So different yet similar
My thumb is down yet rising
My middle finger is rigid and wants your crown.
When the rubber hits the road, I'd love to lay tyre tracks on your back
But alas my love...........the track is foretold.
Brace yourself as you unfold

That's a thumbs up by yours truly

it's my bedtime-ish.
Thanks for sharing that.
Reply
Report

Our whole life is governed by truth and faith. Where truth is logical, while belief is irrational. Logic has a limit because human brain is limited, whereas belief is unlimited.
Our body is governed by both logic and feelings, emotions. Our body (cells, organs) works on logic, but the feelings (the software which control whole body) works on belief, faith. Without feeling, our body is just a logical robot.
The relationship built on logic alone is weak.
The relationship built on feelings alone is painful. But a relationship made up of both logic and feelings is strong. The same is with attraction. Only logical attraction is meaningless. Attraction should be both logical and emotional.

We need to strike a balance between logic and belief, brain and heart (feelings). 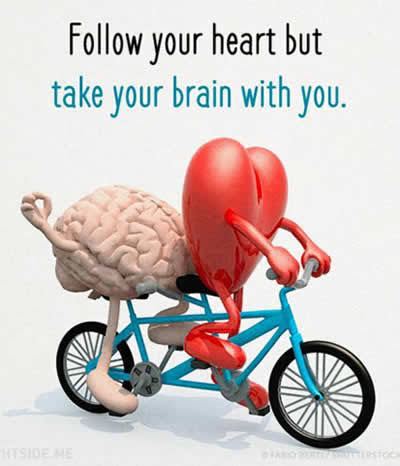 MrBoDangles●Auckland, New Zealand
Oct 24, 2021●26 Blogs●1,196 Comments
#5
I've got no idea why I'm writing this. It has absolutely nothing to do with the price of fish so please bear with me, bare-back preferred but that's another story.

""the irrationality of attraction""
Since it's approaching summer here, I bought 2 different kinds of tomatoes (you say toMato, I say toMarto), and 2 different kinds (genus/species) of corn seeds. I'm hoping to cross pollinate the 'different types' to produce something different.

"the irrationality of attraction" isn't just unique to humans, it's a fundamental aspect of life. Opposites attract. There's a method in the madness, I just haven't figured it out yet but, after all 2 completely different species mate, mutate and produce.

Oh, BTW, I'm growing a couple of dope plants as well but that's another story

Personally I dont smoke weed. Not because it's naughty or anything like that. I grow them because I can and besides, one of my brothers smokes like a chimney.

I'm an insular person, I over think things and prefer my own company. Weed makes me paranoid but as the saying goes "smoke em if you got em". I just appreciate the fact that I can grow weed even though it's illegal here but rules are meant to be broken......that's what I'll tell the judge anyway if caught

My poison is grog, more the merrier

cryptorchidOP●Easton, Pennsylvania USA
Oct 24, 2021●47 Blogs●2,273 Comments
#10
why am i squinting while reading this?
Reply
Report

Is that an order?

I wouldn't say those words out loud in public if I was you because according to Lee the Chalmer.......you should be in the kitchen, barefoot and pregnant.

You can beet an egg but you can't beat a root.

cryptorchidOP●Easton, Pennsylvania USA
Oct 24, 2021●47 Blogs●2,273 Comments
#15
my dear BD, i've been liberated by biology. i can no longer be in the family way. i still lovezzzzzzzz my cheese
Reply
Report

The vortex is starting to spin, let me out of the vortex.

All said and done before I log out. You're beautiful, not just your looks but the way your mind ticks over. Like I've said before, you're genuine, unique, and spunky

MrBoDangles●Auckland, New Zealand
Oct 24, 2021●26 Blogs●1,196 Comments
#19
My stirrups are stirring.
My mount is paramount yet forgiving
Let's ride together my petal as we make soft, delicate dough together.
The yeast is rising and the tide waits for no one least of all the Stallion.

Ride with me,
Buckle up..........sit tight as we ride into oblivion
Reply
Report
Post Comment - Let others know what you think about this Blog.

Share a photo of your pet
Relentlessly powerful performance of Piazzolla
Swedes get microchip implants after Covid passport mandate
3 1/2 Minutes Of Omicron Common Sense: Prepare Now - Y'all WILL Be Exposed.
UK will be one of first countries out of Covid pandemic, says expert
Paul McCartney...
More Blogs

tv shows
thanks giving
just another day
i was born
my mom
alternative lifestyles
the fade
cat speak-no means yes
i've noticed something strange about youtube
calling BS
something fun and clean
luckily for CS, or not
for BD
i remember
my cat is not funny
the vaxed vs the unvaxed
the irrationality of attraction
new dishes
i don't know what sex i am
when you're in the "friend zone"
More Blogs by cryptorchid

Create a Blog
Report Blogs that break rules, are offensive, or contain fighting. Staff may not be aware of the Blog Abuse, and cannot do anything about it unless you tell us about it. click to Report Blog Abuse »
If one of the comments is offensive, please report the comment instead (there is a link in each comment to report it).
secretagent09: "Another Member of CS Has Passed On"(meet us in the forums)