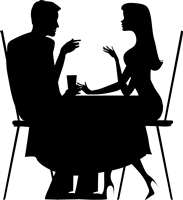 History has established that men pay for dates. After all, it wasn't until the latter half of the 20th century when women actually entered the work force in significant numbers. So logically, it was the man who paid since the female was usually unemployed or at least made significantly less money. This necessity was well established throughout time and helped to prove to the female and her family that he was able to take care of her well beyond courtship. Even when a woman comes into a marriage with a dowry, it is still expected for the man to provide for her as Wikipedia states a dowry is meant as protection from ill treatment from a husband and his family. The dowry "provides an incentive to the husband not to harm the wife." It is not meant as a means for the wife to pay her own way.

Today women in the workplace are a force to be reckoned with. They are shattering glass ceilings and according to the Minneapolis StarTribune are less affected by the current recession. Men are losing more jobs than women; however men earn more than women in the same jobs and more high paying jobs go to men. Women are breaking new ground and blowing away stereotypes but are still comparatively underpaid.

There isn't a clear cut answer. There are so many variables: is it a first date or the 10th date? Are you casually dating or in a relationship? Is either person unemployed? Does one person feel it's important to their pride to pay? Is one person excessively cheap? Does your culture dictate who pays? Many variables exist.

In my opinion, the FIRST date should be paid for by the person who asks the other out. That should be simple. However, I know many men who would insist upon paying even if a woman asked him out. But if a woman is doing the asking, she better be prepared to ante up. Beyond this... it's up to the couple to decide.

After the first few dates, the couple needs to discuss this and decide together who pays. Money issues are a top cause of divorce, so this topic is best dealt with openly and early on. Open, honest discussions lead to stronger relationships whether marriage is your goal or not. Understanding and accepting the other person's attitudes and opinions is a good thing, and it does not mean you have to agree. If you are uncomfortable discussing something as important as this with your significant other, this could be a red flag... use it as a filter. Not every pair is a perfect match. Discovering if your monetary attitudes are compatible will benefit you in the long run.

The reason most people date is to get to know each other and to find their best match, not to settle for just anyone. Who pays on a date is a step in the process of discovery. Dating not only helps you find the best person to spend your time with, it also helps you filter out those you'd be miserable with. Take your time, be honest with yourself and don't forget to have fun.

felixis99•Mar 4, 2012•simplicity, Ohio USA
actually I usually offer to share at some point

but honestly with gentleman above who is so concerned about equality be honored.....I have also said many times OK, equality it is - then I will pay for 50% of the dates when HE does 50% of the housework

peacenserenity•Jun 13, 2010•christchurch, Canterbury New Zealand
Whoever does the askn should be payin, I'm from the old schools tho where the gentlemen pay but that doesn't mean I'm gona take it for granted that he is, I always have money in my pockets to save embarassment.

michael073•Sep 22, 2009•kilkenny, Kilkenny Ireland
well i think whoever did the asking out, should offer to pay, but if the other person has anything about them they would offer to go halves...but if its just a coffee or a few drinks who cares, but the chap from canda has a good point, women do bang on about equality and yet when it comes to dates/dating..all of a sudden..its the guys job to decide..where they go..what they do..and on the quiet expect the guy to offer to pay ha..

bigdipper59•Sep 18, 2009•adelaide, South Australia Australia
If you are a man a gentleman ,you pay ,i like tradition and manner Roberts

zira9888•Aug 9, 2009•newport, Isle of Wight, England UK
dreamdiva has it right,
id insist on paying my way or more, and if he refused, id find something else to pay for, so he knows im not looking for a meal ticket type of guy,x

DreamDiva•Jul 12, 2009•Ayr, Strathclyde, Scotland UK
I like to pay my share..I always have..I don't see why men should always be expected to foot the bill for everything..
At least if the man insists on paying everything...I still think it's polite and nice if you at least offer..I'm sure it will be appreciated..
Afterall we ladies harp on about Equality so...lets share equal...

chococherrie78•Jul 8, 2009•samarinda, East Kalimantan Indonesia
tx for this,havent been on the datings scene a while!

Man should pay the first and then she pays the next, and so on

canajun•Mar 28, 2009•Delta, British Columbia Canada
Well this is an interesting issue. Women have fought so hard for all this equality but it seems they don't really like certain aspects of equality, like just maybe having to do and pay just like men have usually had to....... If we REALLY want equality then the rest should theoretically go right along with it, after all it's only fair isn't it? This picking and choosing what you like out of the "equality" issue and ditching what you don't is rather hypocritical don't you think ladies? I'm an egalitarian and believe in true equality in ALL respects. That means in responsibility and such as well. Due to my egalitarian nature I do not like or tolerate double standards no matter how lame the excuse is. I prefer to pay for the date as I am a tad bit old fashioned about certain things HOWEVER it get really annoyed when it's either expected or demanded of me just by dent of my gender. I feel that I should at least either be asked or offered a sharing of the tab. I hate double standards and that attitude in what is supposed to be an equal society is not acceptable. Y'all wanted equality so bad then you should take be held to the same rules as you expect of us men. To say or do otherwise makes one a hypocrite.

Think for a moment how you would feel if us men also held you ladies to certain old fashioned expectations and demands, like maybe acting like a lady in public or being feminine or in minding your tongue (or whatever other goofy item).... would y'all "really" like that too????? Double standards really suck don't they????

Yes, I may prefer to pay on a date but if a woman expects it or demands it there won't be a second date because she will have told me right there and then that she believes that double standards are ok and the future of a relationship with a woman like that is a sure fire indicator of abuses coming up. (btw, that's experience and observation talking)

teres•Mar 28, 2009•Larissa, Thessaly Greece
Javalover is a real gentelman despite his young age and will no doubt have great success with women! wish him the best of luck!

javalover•Mar 20, 2009•Pittsburgh, Pennsylvania USA
I think that the man should always pay. It is the mans responsibility to make the women happy.

Maria_Mexico•Mar 16, 2009•Morelos, Mexico State Mexico
I believe the couple has the same responsability in all they do. Both of them have to to project their style of life. The men or wamen have change many way to think about the responsability in a house, in the life and the point of view. It´s not possible in this century we have anachronistic thoughts.

However, everyone must take their precautions so that no one abused the other.

Post Comment
More Articles
6 Texts You Shouldn’t Reply To Scary Events That Made It Seem Like the World Was Ending How to move on after a difficult break-up 5 Things a Quality Man Won't Do What you should know about Online Dating over 50 How To Stop Wasting Time And Money On Dating More Articles
Staff Articles
7 Online Dating Tips For Beginners 8 Strategies to Get You Through Being Dumped by Your Boyfriend Dating Pitfalls: Spotting a Gold Digger How To Avoid The Pain of First Date Rejection 4 Reasons You're Still Single What Makes Forgiveness So Difficult? Developing Your Hidden Intuitive Powers 8 Tips to Live a Life That Is Positive in Nature 5 Signs You're Not Ready for a Relationship Fight Depression: 10 Natural Ways to Weather the Storm Toxic Shame How to Cope with a Stubborn Child Ten Reasons a Man Should Cook The World of Dreams: Common Dream Themes Choosing Wedding Lingerie: How to Wow Your Groom on Your Wedding Night Identity Theft: How to Combat Phishing How to move on after a difficult break-up 4 Tips for Improving Your Dating Life Is Your Relationship Dysfunctional? Whittle Your Middle: 5 Strategies That Work More Articles by Staff (546)

Create a Article
Terri91: "HOW WELL DO YOU REALLY KNOW ME"(meet us in the quizzes)
All Articles Create Article My Articles Posters Comments