In condo life, if you don't arrange for your trash to be removed, it must remain near the dumpster for normal garbage collection. Someone dies and 40 years of furniture and bedding gets stacked along side of a dumpster. Sometimes, items that are in fair to good condition get recycled. It's there in the morning and an hour later it's gone, before the garbage truck passes by.
I've watched the sanitation crew load a sofa into the back and the arm comes down splitting the sofa into pieces to be consumed by the steel arm and not seen again. They usually do a quick check under cushions to see if there's cash under there... One worker said only coins... he's waiting for surprise payoff of a wad of 100's

During the night, a statue was placed in front of a dumpster near the community entrance. Badly weathered, it was obviously on display in someones back patio. When it's time to go, it's time to go and by noon, the statue disappeared!
I figured the new owner painted it with polyurethane and the statue 'lives again'

I don't know what religion/culture worshiped him, but it was important for one man's trash to become another man's treasure. 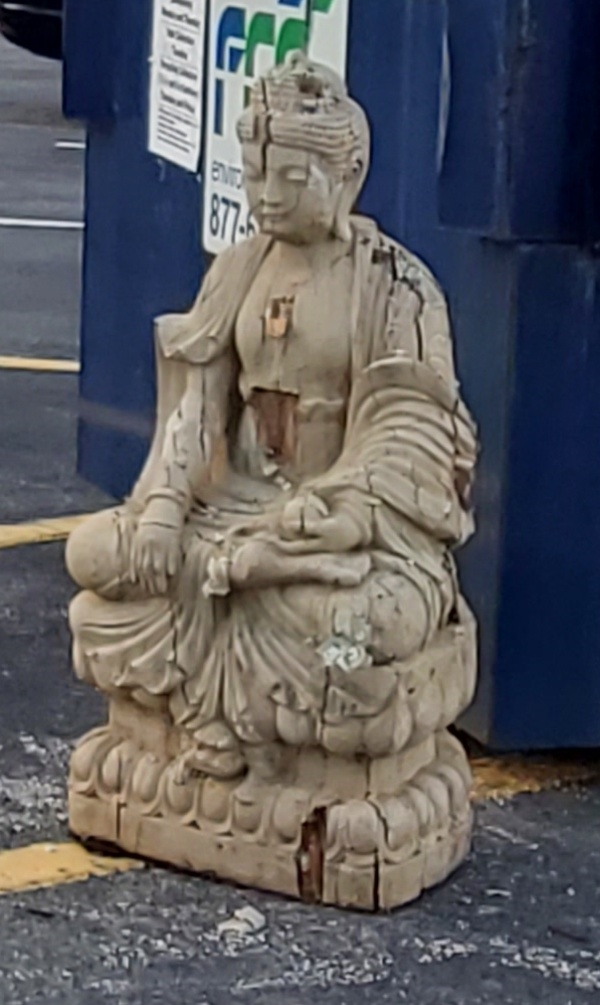 suziecute●Enfield, Greater London, England UK
Sep 7●7 Blogs●118 Comments
#1
A friend of mine in Florida told me there's a day a year when all the bulky items can be left out for pickup in her area, and she sets off treasure hunting, and can see all her neighbours idly out and looking as well. Her best find has been two classic wooden garden chairs. They needed only to be sanded down and varnished, she'd seen new ones selling on very upmarket sites at $1500 each. She sold them on for $2000, easy pay for a couple of hour's work.

In UK we are more likely to take stuff along to a weekend carboot sale, give to charity, or recycle, very different mind-set, but that's not to say occasional finds can't be spotted .

online now!
chatillionOP●Boca Raton, Florida USA
Sep 7●1,533 Blogs●4,486 Comments
#2
A friend helped his relatives clean out their garage. He said some of the things were good, but the relative wanted to part with them.
Not knowing what to do, he went to the weekend flea market and sold nearly everything, making more on the weekend that his regular job.
Work got around that he was available to clear out apartments and garages and it became a steady income.

2 years ago I helped my nephew pack a container that moved his belongings to California.
What didn't fit, we were able to 'Craig's List' and moved things like children's toys, bedding and furniture.
Reply
Report

Orzzz●Portage, Wisconsin USA
Sep 7●66 Blogs●532 Comments
#3
It is sad how many people think what they dont want is trash. I miss the good old days when the town had pickup for stuff that wasn't ordinary garbage. People could set out furniture and whatever big objects on the curb and the city truck came around to haul off. What it became was a free for all. When someone asked the city about it, they said PLEASE take. Saves the city landfill!
Talk about a feeding frenzy. Cars and trucks drove the streets. If you saw something and had to turn around....too late. The car you met grabbed it and it was gone.
I have a pie safe in my dining room I created. Saw a 3 drawer dresser sitting. Stopped to look. Owner came out, knew me some. Said for sure take. And you should take this ..and this...

Uh...that too, but not all your junk. The dresser is solid wood. One drawer was missing. I stripped it, stained and varnished. Left one drawer on top and put a shelf in instead. Made a frame and did a punch design out of a brass sheet of metal. Added hardware and turned a blue and white painted hunk of junk into a pie safe worthy of value.
My motto is dont see what is..see what it could be.

online now!
chatillionOP●Boca Raton, Florida USA
Sep 9●1,533 Blogs●4,486 Comments
#6
Someone put a metal filing cabinet near the dumpster early this morning and it was gone an hour later!

online now!
chatillionOP●Boca Raton, Florida USA
Sep 9●1,533 Blogs●4,486 Comments
#8
Probably Ray.
Someone told them you've got the DECLASSIFIED rubber stamp.
I think they were headed to your place.

Create a Blog
Post Comment back to top
Report Blogs that break rules, are offensive, or contain fighting. Staff may not be aware of the Blog Abuse, and cannot do anything about it unless you tell us about it. click to Report Blog Abuse »
If one of the comments is offensive, please report the comment instead (there is a link in each comment to report it).
Stargazer111: "10 reasons why is better to remain single."(meet us in the top 10 lists)