6 Reasons to Dump Him 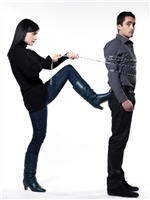 Your boyfriend is a good-looking, well-educated and a pretty charming guy, but you're still not sure about him. The following are six very valid reasons for dumping your boyfriend:

If you're a woman with goals and plans for your life, it's difficult to be with someone who is the opposite. You are happy and excited to work toward your dreams while he is happy where he is. In the beginning you might have no trouble with this, but as time goes on you may likely start asking yourself (and him) when he plans to do more with himself.

He is constantly calling you, even when you've told him you're busy with work. When he does stop calling he'll email you instead. Usually he doesn't have anything interesting to say, but he always needs a response from you. He also wants to spend every waking moment with you. If you're going out with the girls for drinks, he'll tag along. If you're staying home to finish a project, he'll hang out and keep you company. He never seems to go away and you never get a chance to miss him.

He always thinks that other men are hitting on you and accuses you of enjoying the attention from them. He thinks if you're not spending time with him, you're out with other guys. He will create situations in his head and attack you with them because to him they are reality. You will find yourself constantly defending yourself to him. A jealous man will insist that he be the only man in your life. He will force all other men out of your life. Once he's accomplished that, he will likely move on to forcing everyone else (the females) out as well because he needs you all to himself. Jealousy like this leads to isolation, which is a very dangerous situation to be in.

4. He's unable to have a conversation

A man who is unable to have a conversation is boring. He doesn't seem to know what's going on in the world around him and he likes it that way. He's mostly interested in himself and his interests anyway, so that's all he can talk about. You can try to talk about books you've read lately or the latest kidnapping in your town news, but he won't have anything to say. He has more than enough to say about himself though. If you're not talking about him, he's just not interested.

The first time he suggested you go Dutch on a date you didn't think anything of it, but it's become the norm now. When you offer to pay for the entire date he's thrilled, but he doesn't return the favor the next time. He likes to point out the cheapest dinner on the menu and pushes you to get those, even if he orders steaks. He'll suggest a lot of dates that don't cost much, which is not a big deal, but sometimes you'd like to catch a movie without hearing a rant about how much it costs to do so.

A man who is manipulative will make you feel guilty for not doing things his way. He will claim you don't love him. He is so good at that game that you end up feeling guilty for something you didn't even do. You'll find yourself running to him to make him feel better. Don't be fooled though. This kind of man doesn't actually question your love for him, he just knows he can get what he wants by doing so. He will threaten to leave you if you don't do what he wants. He has no intention of doing so, but knows exactly what the threat will gain him. Giving in to this behaviour only causes it to become worse and you are left feeling like a slave to his manipulation.


The above are valid reasons you should dump your boyfriend even if you think you're in love with him. We often put up with things in hopes that they will eventually change. Unfortunately they rarely do change and it's you who will end up frustrated and feeling trapped in the relationship.

Michael_A1•Aug 11•Columbus, Ohio USA
So where are the reasons you should dump a women , rest assured , that would only require omly one answer .

Scubadiva•May 14, 2012•New Jersey, USA
True. Nice article.
Post Comment
More Articles
4 Signs He’s Not Your Soul Mate 4 Signs The Woman You Like Has Put You In the Friend-Zone The wonder of Astrology 5 Reasons You May Be Feeling Fatigued Signs a Guy Is Looking for More Than a Hook-Up 10 Reasons a Man Should Cook More Articles
Staff Articles
To Social Distance or not To Social Distance - 4 Tips for Dating During the Pandemic 7 Online Dating Tips For Beginners 8 Strategies to Get You Through Being Dumped by Your Boyfriend Dating Pitfalls: Spotting a Gold Digger How To Avoid The Pain of First Date Rejection 4 Reasons You're Still Single What Makes Forgiveness So Difficult? Developing Your Hidden Intuitive Powers 8 Tips to Live a Life That Is Positive in Nature 5 Signs You're Not Ready for a Relationship Fight Depression: 10 Natural Ways to Weather the Storm Toxic Shame How to Cope with a Stubborn Child Ten Reasons a Man Should Cook The World of Dreams: Common Dream Themes Choosing Wedding Lingerie: How to Wow Your Groom on Your Wedding Night Identity Theft: How to Combat Phishing How to move on after a difficult break-up 4 Tips for Improving Your Dating Life Is Your Relationship Dysfunctional? More Articles by Staff (547)

Create a Article
porsher: "Inseparable! "(meet us in the ecards)
All Articles Create Article My Articles Posters Comments