From Kittenfishing to Firedooring: The Perplexing Language of Modern Dating 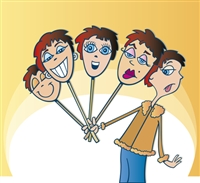 The online dating world comes with a vernacular all its own. No matter how young and "with it" you may be, there are so many new coinages that turn up, so if you're not deeply involved in the lifestyle, you're bound to come across a few that leave you scratching your head.

When someone ghosts you, they abruptly cut you off. You may have been on a couple of seemingly successful dates, but secretly, they are not happy. While they want to end things, getting into the messy business of explaining everything is too awkward for them. So, they simply turn into a ghost and vanish from your life. They don't call or pick up phone calls, and they don't answer your messages.

Some people will ghost you, but they are in denial. They do completely disappear from your life for a while, but they suddenly come back into your life as if nothing ever happened. It's called submarining -- they go under, only to surface much later.

When someone breadcrumbs you, they want to break up with you, but ghosting seems too harsh and open admission seems too difficult. So, they keep stringing you along with the occasional noncommittal message. They hope that at some point, you'll get tired of being strung along, and give up, making it easy on them.

Benching is another version of the breadcrumbing approach: a bencher will string you along in a more active way. They really believe that they shouldn't burn their bridges with you because, as they see it, there is a definite chance that they will need to get back together with you, should one of their better love pursuits fall through.

A haunter ghosts you -- they dump you abruptly -- but they are still curious enough about you to stalk you on your social media accounts to see what you're up to. While you won't be able to tell if they do this on Facebook or Twitter, Snapchat and Instagram let you see who's around. People haunt because they want to continue to watch you to make sure that dumping you was the right decision.

When you're someone's stash, they date you, but they don't tell anyone about it. You don't appear in any of their social media. If you tag them on one of your posts, they untag themselves. What they're trying to do is to date you in secret while they explore other possibilities. This is a form of benching, except that it's far more active.

When someone cushions you, they flirt with you on social media or elsewhere as if they were really interested, but they never take the step into actually dating you. They are keeping you warm, much as a person might want to keep a seat warm, just in case they wish to make use of you one day.

When someone catfishes on a dating site, they pretend to be really great catches -- with fake photos and fake profiles. The idea is to somehow get someone interested with imaginary information. Kittenfishing is like catfishing, except that it doesn't involve as much lying. A kittenfisher may post a picture with an unreasonable amount of photoshopping, or a picture from many years earlier; or, they may say that they are a rocket scientist when all they do is work at a toy company that makes Space Shuttle toys.

A firedoor is a door that opens one way, but not the other. When someone firedoors you, they call you to set up a date or message you when they want to have a fun conversation, but they never respond when you call them.

Lovebombers go for the first impression - they try to overwhelm their date with a storm of affectionate behavior. From expensive gifts to over-the-top compliments, nothing's too brazen -- but then, they abruptly lose interest the moment they find someone else.

Millennials tend to be wary of entering relationships. So, they have an alternative -- situationships. It's when you go out on dates and sleep together, but do everything in a disengaged sort of way. If you're not relating to each other and are just two people who find themselves in a situation together that you're too lazy to find the words to describe properly - you're in a situationship.

The modern dating vernacular isn't just a new language for old stuff -- it's an all-new way to approach finding romance. Unfortunately, some of it isn't very pleasant.

Post Comment
More Articles
Loving Yourself Can Make You Sexy Obsession Is Not Love Moving In Together Without Falling Out of Love The Play Book Do You Believe 2012 Is The End Of The World? ... I learned at CS More Articles
Staff Articles
Developing Your Hidden Intuitive Powers 8 Tips to Live a Life That Is Positive in Nature 5 Signs You're Not Ready for a Relationship Fight Depression: 10 Natural Ways to Weather the Storm Toxic Shame How to Cope with a Stubborn Child Ten Reasons a Man Should Cook The World of Dreams: Common Dream Themes Choosing Wedding Lingerie: How to Wow Your Groom on Your Wedding Night Identity Theft: How to Combat Phishing How to move on after a difficult break-up 4 Tips for Improving Your Dating Life Is Your Relationship Dysfunctional? Whittle Your Middle: 5 Strategies That Work How to Trust Again Supporting a Friend Who Is Grieving 10 Weird Trends of 2017 How to Tell if You're Dating an Alcoholic Good Reasons to Dump Your Man How to Avoid a Miserable Relationship More Articles by Staff (540)

Create a Article
dinzita: "The Fast and The Furious"(meet us in the quizzes)
All Articles Create Article My Articles Posters Comments