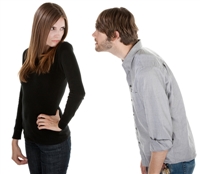 When people talk about abusive relationships, often the first thing that comes to mind is physical abuse. While this type of abuse may be the most obvious, it is by no means the only kind of abusive behavior that can be present in an unhealthy relationship. If you suspect that you are in an emotionally abusive relationship, watch for these five signs that can be a harbinger of escalating abuse such as name-calling or violence.

1. One of the most difficult abusive behaviors to detect is jealousy. It's a rare person who doesn't experience some jealousy on occasion, and you'll need to differentiate between normal jealous feelings and jealousy that can threaten your relationship and your well-being. A red flag is when your partner accuses you of cheating without reason and generally views you with suspicion. If your partner's jealousy causes him to prevent you from living your life freely, you are in an abusive relationship.

2. Abandonment is another sign of emotional abuse. This does not necessarily mean that your partner has suddenly left the relationship. Rather, he may blow up during an argument and storm out the door, leaving you with no idea of his whereabouts for hours or days. During an outing, he might become angry and take the car, leaving you with no way to return home and placing you in a potentially dangerous situation.

3. While few couples see eye to eye on every issue, if your partner makes it a habit to insult your beliefs, he is showing a lack of respect that crosses the line into emotionally abusive behavior. The same is true for a partner who continually ignores or minimizes your feelings, while prioritizing his own.

4. In the movie Gaslight, Ingrid Bergman's new husband lies and manipulates her reality until she believes she's lost her mind. While most abusers don't go to the extreme depicted in the film, many will engage in these tactics from time to time. If your partner pretends to not remember bad behavior, continually lies to you or otherwise tries to manipulate you, you are experiencing a form of emotional abuse.

5. Taking undue advantage of one partner is also abusive behavior. When a partner makes no effort to contribute to the household, leaving the responsibility for paid employment, housework, childcare and other duties to the other person, it is unjust. When such behavior becomes a pattern, it is abuse. In a healthy relationship, each partner contributes to the well-being of the other.

Keep in mind that one lie or intense argument does not make for an abusive relationship. It is only when a pattern of disrespectful behavior establishes itself that you must consider the possibility of emotional abuse. If you believe this to be the case, seek couples counseling, and when necessary, leave the relationship for your own safety and mental health.

Post Comment
More Articles
4 Signs Your Girlfriend Is A Keeper Are You Making These First-eMail Mistakes? Let Go and Move on – How to Cope With Feelings for an Ex 5 Ways You Can Tell If A Woman Is Desperate Winning Against Your Girlfriend Male Bonding in a Male-Competitive World More Articles
Staff Articles
7 Online Dating Tips For Beginners 8 Strategies to Get You Through Being Dumped by Your Boyfriend Dating Pitfalls: Spotting a Gold Digger How To Avoid The Pain of First Date Rejection 4 Reasons You're Still Single What Makes Forgiveness So Difficult? Developing Your Hidden Intuitive Powers 8 Tips to Live a Life That Is Positive in Nature 5 Signs You're Not Ready for a Relationship Fight Depression: 10 Natural Ways to Weather the Storm Toxic Shame How to Cope with a Stubborn Child Ten Reasons a Man Should Cook The World of Dreams: Common Dream Themes Choosing Wedding Lingerie: How to Wow Your Groom on Your Wedding Night Identity Theft: How to Combat Phishing How to move on after a difficult break-up 4 Tips for Improving Your Dating Life Is Your Relationship Dysfunctional? Whittle Your Middle: 5 Strategies That Work More Articles by Staff (546)

Create a Article
Lammycool: "My Top 10 of Music for S.E.X."(meet us in the top 10 lists)
All Articles Create Article My Articles Posters Comments